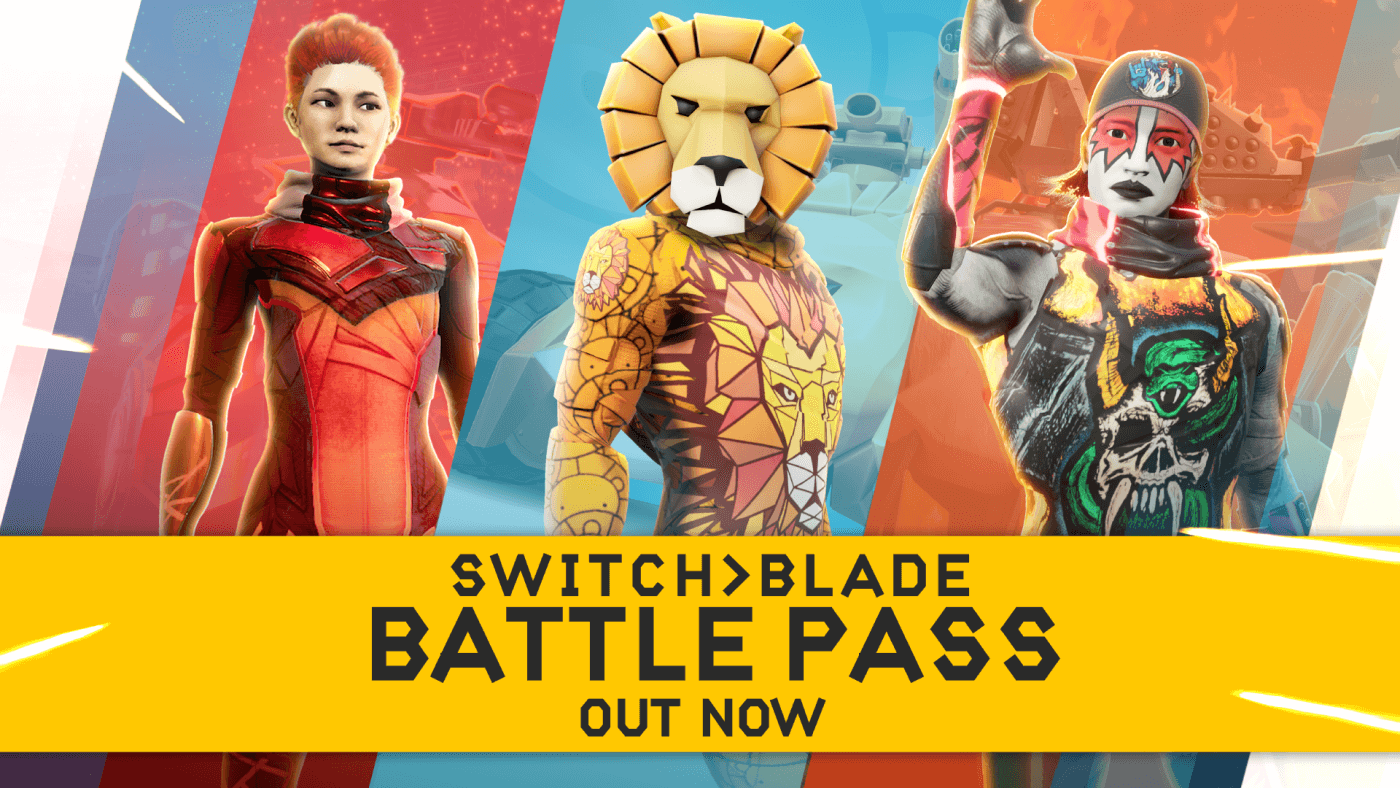 We wanted to bring you a developer blog post today highlighting our next upcoming feature in Switchblade. We’ve been reviewing ways to improve the long term player experience in the game and provide more long term progression for rewards. At present, the main incentive for this is through earning Battle Points and Bit Cash, along with rotating challenges and Vehicle Mastery progression, to spend on cosmetics and purchasing vehicles. The team wasn’t fully satisfied with this as a complete offering and this was mirrored in the player feedback we were receiving.

The feedback mainly consisted of how Switchblade lost a lot of its end-game drive and progression after the removal of Competitive mode. As we have previously discussed, the mode was removed as it did not meet the ambitions and standards we were aiming for on our Early Access or Free-to-Play launch. That is still the case as we continue to work on Competitive mode internally with the hopes of it releasing this year (more details will be provided when we have them locked in!).

As another way of addressing this feedback, the team wanted to deliver a new form of progression that could be undertaken regardless of what mode you were playing. We settled on a Battle Pass as a mechanism for delivering this new rewards system to players and set about designing the rewards themselves and the systems to support it. Our thoughts behind developing this sort of content before our full release is that releasing a version of the Battle Pass whilst we’re still in Early Access allows us to provide exclusive rewards to our early access players whilst testing a system that will act as a supporting element of our Full Release later in the year.

The Switchblade Battle Pass contains both free and premium rewards, so there’s something for everyone! The free tiers are available to all players, from Free-to-Play to pack owners, whilst the premium tiers can be purchased by anyone for $9.99 or 600 Bit Cash. We’re introducing an item rarity system for the battle pass which we hope to extend to the rest of the game in a future update. Free tiers will contain standard rewards whilst premium tiers will contain a mix of superior, epic, legendary and ultimate rewards. 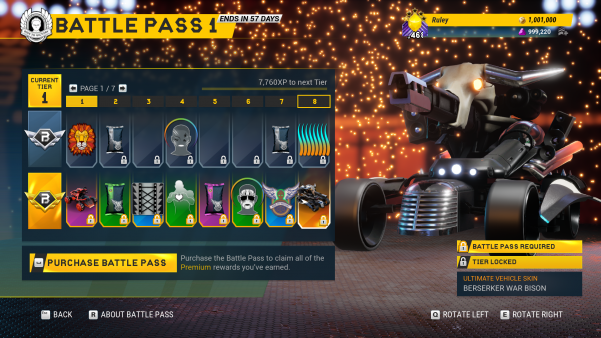 How does our Battle Pass work? In the image above, you can see the two tiers on the Battle Pass screen. The free tiers are on the top branch, denoted in grey, whilst the premium tiers are denoted below it in different rarity colours. When you level up in the Battle Pass, you unlock the next reward tier and unlock the use of the item in that tier. One of the rewards available in the Battle Pass is our new Battle Packs, these contain one random item from a given rarity with equal odds on each item, with different packs for each rarity. This system has duplicate protection and a limited pool to draw from so you will have unlocked every item by the time you reach the end of the Battle Pass. As part of the Battle Pass update, we’re updating our challenges to include Battle Pass XP as a reward to help you work towards your next tier!

When unlocking rewards, if you have purchased the premium Battle Pass, you gain access to both items immediately. If you have not purchased the Battle Pass, the free item is awarded to your account but the premium item is not. Should you choose to purchase the pass after levelling up, all premium items that you have unlocked up until that point will be immediately awarded to you. At any time, you can choose to accelerate your rank in the Battle Pass by buying additional ranks to instantly unlock new rewards.

Not all rewards are random in the Battle Pass. There are rewards that have been allocated to specific levels and can be seen on the Battle Pass screen. Such rewards include The Pegasus Helmet at level 50 on the premium tier. Another guaranteed reward on the free tier that we are excited to announce is our next vehicle, The Angel! All players will be able to unlock this vehicle if they reach level 24 in the Battle Pass. This will be in addition to Legendary Pack owners instantly unlocking The Angel for use along with it being available for purchase in the shop. 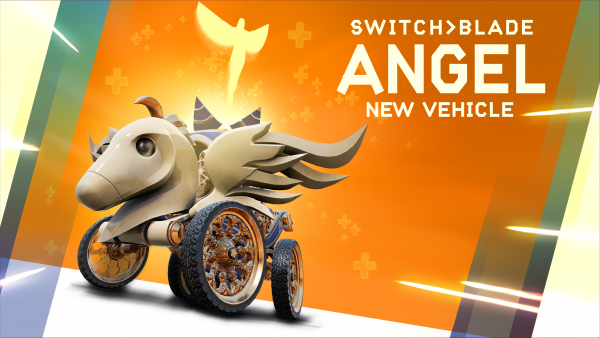 Hailing from a golden era of opulence and engineering artistry, the Angel is a support unit specialising in sustaining groups of allies. Its primary fire is a light cannon that fires a burst of 3 projectiles, providing supporting fire from a safe distance. In a first for a support vehicle in Switchblade, the Angel’s primary source of healing is via a passive area of effect (AoE) that slowly heals nearby ally mobs and vehicles. This healing AoE can receive a temporary boost via the Angel’s secondary ability, increasing its healing output for a short time. Its other secondary ability allows the Angel to become invulnerable to damage for a short period of time but at the cost of being unable to use any other abilities, including its passive AoE healing. Finally, its super ability creates a powerful area effect around the Angel that rapidly heals your allies and keeps them alive through almost any attack.

We’re thrilled to see how the community responds to the addition of the Angel to Switchblade, especially given its different approach to healing for the game. Keep an eye on our social media channels in the run-up to the Battle Pass as we reveal more information about the Angel! We can’t wait to hear what you all think of this new vehicle when it goes live! 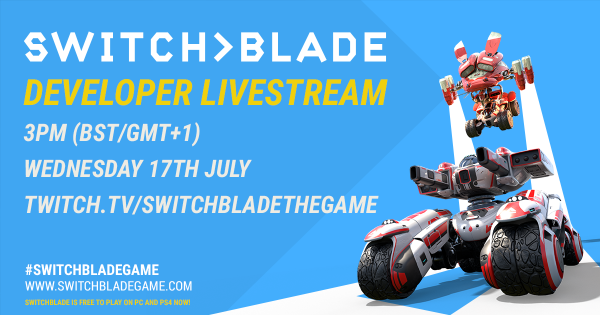 Join us later today on Twitch for a deeper look at The Battle Pass and The Angel as I sit down with associate producer Nariece Wint and Audio Designer Doug Waters to take you through some of the rewards and explore the audio design elements of The Angel as well as giving you all a look at our new support vehicle in action!

To stay in the loop on all things Switchblade, be sure to join our Discord and follow us on Twitter.