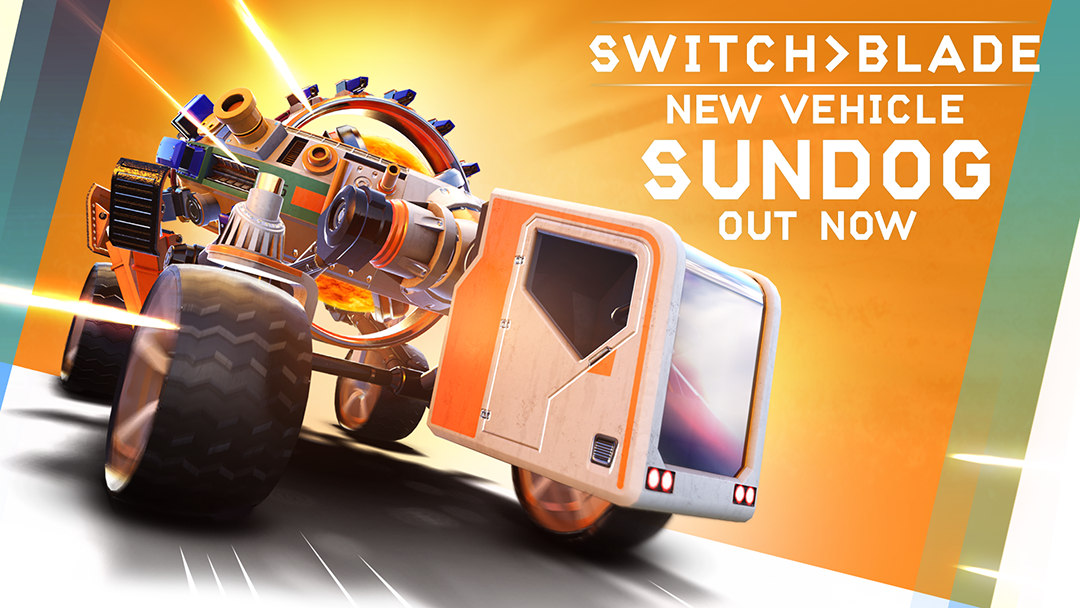 Today, a new fighter class vehicle joins the fray! We’ve already teased The Sundog on several occasions with our developer livestream’s and social media posts so it’s great to finally get it out for everyone to enjoy. We’ve also added some new welcome challenges for new users as well as a few balancing tweaks to the game which you can learn more about in the patch notes.

After scientist at the Super-Cern high energy physics laboratory successfully led their fighter design to victory in the 3153AD amateur Switchblade leagues, they decided to turn pro and bring their sun-fuelled little scrapper to the professional Switchblade circuit. Harnessing the power of its self-contained star, the Sundog’s kit offers a wide-range of utility and good old fashioned damage, making this Fighter Class a formidable adversary in both PvP and laning.

The Sundog’s Primary Weapon is the PHASE ARRAY.

Its other Secondary Ability is NANO BANNER.

Keep an eye out on our social media channels later in the week for a Developer Diary where we sit down with one of our Game Designers, David Deeble, to talk about The Sundog in greater detail as well as some of the goals and aims originally laid out when designing the vehicle.

Rolling out the Red Carpet

We’ve been reviewing our early player experience recently and wanted to further incentivize new players to complete the game’s tutorials by offering them Bit Cash as a reward. To accomplish this, we’re adding in some new welcome challenges for new players. The first 3 challenges a new player will see in the challenge system will be locked to the following:

We’re hoping that this will act as a clearer guide for new players for their first steps in Switchblade as well as providing them with a Bit Cash reward so they can start exploring the game’s storefront of vehicles and cosmetics. For players who have already completed the tutorials, we’ve got you covered. We’ve gifted 150 Bit Cash to all players to ensure that nobody has been left out! Be sure to let us know what you’ll be spending it on by tagging our social media accounts!

There’s been a lot of development work going on into new content, challenges and vehicles that we’re excited to share with you all soon. We’ve also been narrowing in on bugs that have been reported to us by the community along with vital feedback. Be sure to keep an eye on our community trello board for updates as and when they happen.