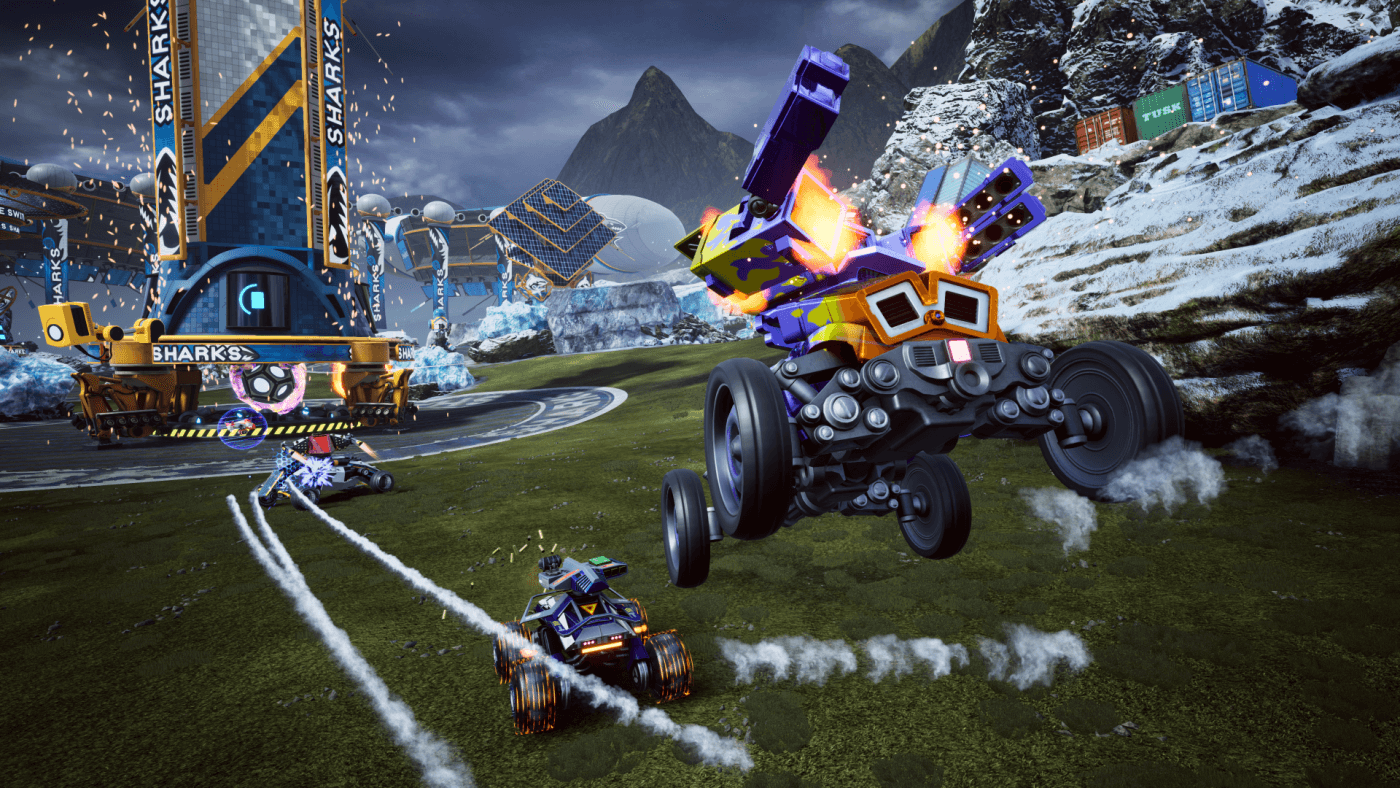 Last week we announced that SwitchBlade would be going Free to Play later this month on 22nd January! Whilst we’ll remain in Early Access, it’s an exciting time for the team as we knuckle down and work on our last few releases before we push the big red button and open SwitchBlade up for everyone to play, absolutely free.

There have been a few questions about what Free to Play means for players who have already bought SwitchBlade at any stage along the way and we wanted to give some clarity on the different versions and what this means moving forward:

Free to Play players will have access to the daily rotation of 10 vehicles along with the option of buying more vehicles individually or upgrading to one of the vehicle packs via the in-game shop. This rotation exists to ensure that games can always be played and that teams have 10 vehicles to fill the 10 picks each game requires.

These packs are functionally the same as one another, with the only exception being the Founders pack skins that were awarded to our first wave of players. Players with these packs have full access to all vehicles in the game along with vehicles that will be added in the future.

All players have access to the in-game store where cosmetic items and experience boosters can be purchased with in-game currencies along with purchasing new vehicles to use in-game (if players do not own the Legendary or Founders packs).

We’ve been teasing about the upcoming changes to the matchmaking system on social media this week and there’s certainly a lot to talk about. Our ambitions are to reduce the number of empty space in lobbies and provide full 5v5 player lobbies for the community whilst shortening queue times overall.

The changes aren’t quite ready for prime time quite yet, but we’ve managed to deliver a few fixes into today’s patch which should stop parties from being split when joining a lobby from the Hall of Champions! We realise this has been a huge community concern and we’re glad we’re starting to get a handle on it.

Expect to hear more on these planned changes in the future.

Balanced, but not so Perfectly

We’ve made some further tweaks to balance gameplay in SwitchBlade. There have been some tweaks to the towers in that they no longer self-heal and their output damage of the tower laser has been reduced. Mobs have also received a buff to their health along with some changes to how some deployable shield abilities work for some vehicles. If you want to dive into the patch notes in more detail, as well as reviewing the list of known issues and bugs in the build, you can check them out here!

Finally, we understand just how important it is to look your best in the Hall of Champions or whilst you’re hanging out with other players whilst waiting to respawn. To help refresh your wardrobes for 2019, we’ve added new cosmetic items for players to earn and buy in Switchblade. There’s a wide selection of patterns, helmets, hair colours, eyes and much more!

That about wraps up our first patch of 2019! We’re always listening to conversations around Switchblade on our social media accounts and on our Discord server, so be sure to join in on the discussion on whichever platform you prefer. We’re also running the occasional Bit Cash giveaway in our Discord server, so be sure to pay it a visit if you’re eyeing up a new skin or helmet that you want to buy!

See you all on the battlefield.